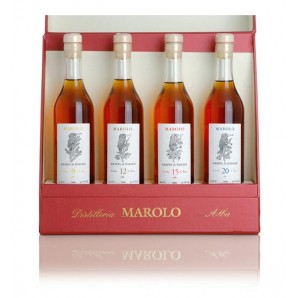 Every now and then you still come across things that have been around for ages, but have only really caught on in modern times. This also applies to the wide field of beverages. Would you have thought, for example, that grappa has existed since the middle of the 15th century, but has actually only been appreciated by the public for a little over half a century? This is because the process of distillation was only technically optimised in the middle of the 20th century in such a way that grape marc spirit - produced from fermented grape marc, i.e. from wine mash - could generally be considered digestible. When you order grappa from Kitchencorner, you will receive the finest brandies from our range delivered directly to your home.

Grappa is not just grappa, there is hardly a schnapps that could be more versatile. This brandy can be obtained from both red and white grapes, but the most important characteristic of the spirit is its storage. Depending on the wood of which the grappa barrels are made, the brandy acquires a certain colour - but also its own smell and taste. Oak wood gives the grappa a rather tart, cherry wood a rather sweet aroma, while chestnut gives the high-proof drink a great brownish colour. By the way, grappa must have an alcohol content of at least 37.5 percent, but there are also varieties with up to 70 percent. Either way - enjoy your tasty Grappa consciously and with reason.